A downloadable tool for Windows

To start using GlyphBoy Swap, you just have to:

GlyphBoy Swap can be used for all kinds of GB Studio projects, commercial or not, without needing to credit me. It is appreciated though ^^ 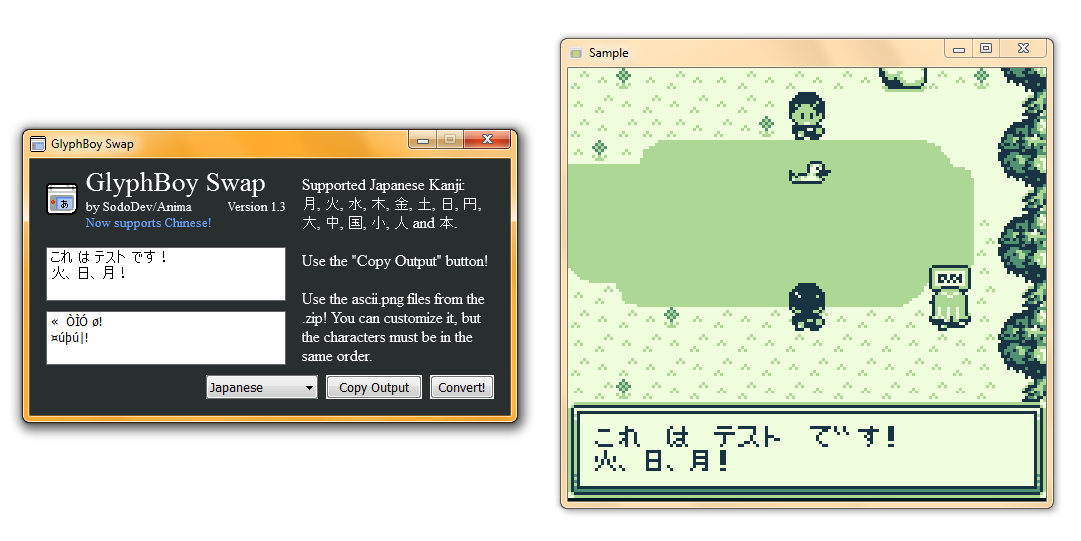 Note: If you don't see anything after pressing "Convert", don't worry, the text was converted. Press "Copy Output" and paste your text. It should work as expected.

Hello, I'd like to hear about Korean language support.

Unfortunately, I couldn't find a simple way to support Korean. I wasn't able to decompose characters and make them work nicely with GBS. There was one person who tried to do that, and posted their progress in the official Discord server, but I haven't heard from them in a long time.

This doesn't seem to work with GB studio 3 sadly. Is there an update?

GB Studio 3 can use codepages and fonts directly, so there's no point in using this for new projects. The documentation mentions this, but you can ask the Discord server for help.

why was this recognised as a virus by defender? i was hoping to use it .. edit: 1.6.1 worked for me, thank you

Hey! Don't worry, it's a false positive, GlyphBoy Swap doesn't do anything weird to your system (afaik... °A°).

yes but i used defender (dont know how to turn it off) and every time i tried to run it and ignore the warnings an error occurred saying that it has a virus. 1.6.1 worked tho

I have poor English skills. Sorry :(

Can you add Korean language support? There are several ways to create a game that is very limited but supports Korean.

It is one of the methods devised among scholars regarding the problem of Korean typewriter processing in the past. There is a decrease in readability from the standpoint of Koreans, but there is no problem in reading and interpreting.

Below is an image of a NES game that has been made Korean by applying this notation method. 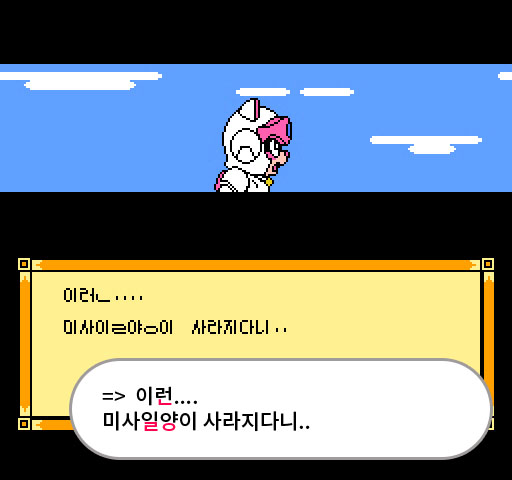 "Semi-combined fonts" is a way to use graphic tricks.
It requires a little more capacity than a phonemic writing system, but
Depending on the developer's ability, you can add enough to the 256 character ascii table.

The advantage of "semi-combined font" is unlike phonemic writing system.
On the outside, it looks like a completed Korean, so readability is not degraded. Since it is just a trick, it can be produced relatively easily like a phonemic writing system without special programming skills.
Instead, due to the structural characteristics, there are many left and right margins.

Below is an image that explains the semi-combined fonts easily. 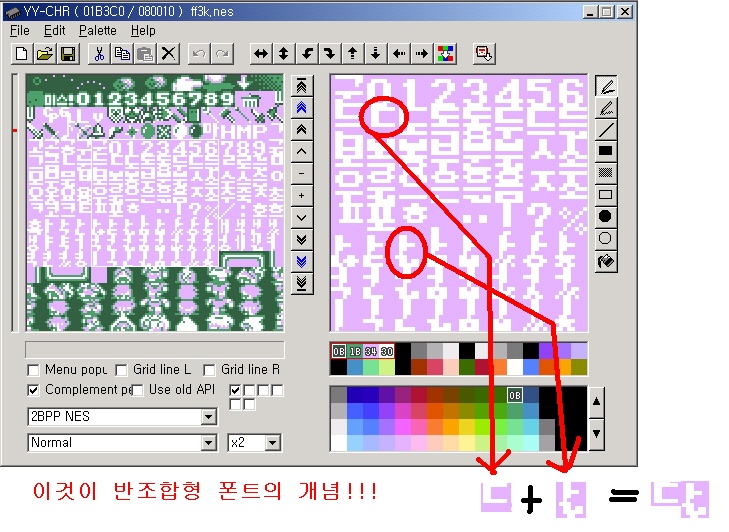 I am well aware that gb studio cannot get large size ascii sheets due to structural limitations. A minimum of 2000 characters is required to make up the minimum complete form of Korean, but using the above optimization, you can add Korean to Japanese or Chinese ascii sheets that allow up to 256 characters.

Thank you for sharing your idea on how to allow Korean text to be used! I have discussed this in the official GB Studio server before, but reading your comment, I realized it is possible!

Unfortunately, there's no way to divide Hangul characters into their individual letters in the software I'm using (Clickteam Fusion). I tried asking the CTF community, but they said such thing most likely doesn't exist. I could however allow the individual letters to be used, but that wouldn't look good. Do you happen to know a way to make it work without having to code in 2000+ characters.

The current Unicode is Korean Completion (KS X 1001), and 2350 characters, which are the most frequently used among pre-combined Korean characters, are carefully selected and one space is allocated for each character.

This was to comply with international standards and for compatibility with other languages or systems. It's also very simple.

However, in the 90s, where memory was limited, it was difficult to put all 2350 characters like this, especially in software such as games.

At this time, what was mainly used at the time was "Combined Hangul".

"Combined Hangul" is a method that focuses on the basic characteristics of Korean that are completed by combining each letter like a Lego block.

The divided words are divided into beginning sound-middle sound-ending sound, and they are combined and output.

In this case, the number of basic characters required for Korean language implementation can be greatly reduced.

Here is an example image. 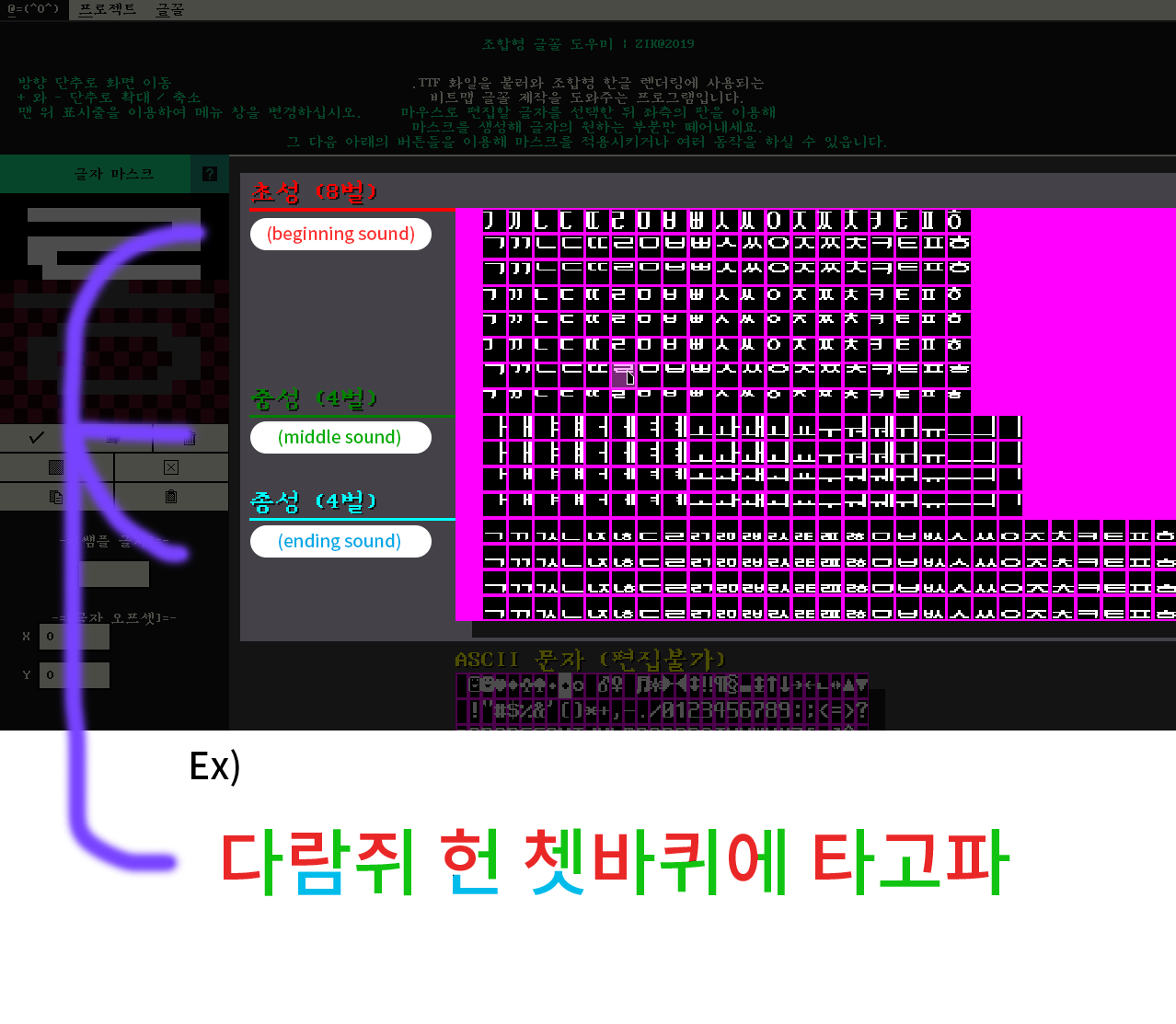 However, it can be tricky to implement combinatorial Hangul in limited systems like Clickteam Fusion. Below is a document on how to implement the combined Hangul, but since this page is for Korean users, it is difficult to interpret correctly if you do not know Korean.

In the case of the Korean complete form (KS X 1001), there is a pre-written list because it is an international standard. These are the 2350 Korean characters listed in the entry on the wiki below. You don't have to come up with all the combinations, just copy and paste. It's a very simple method, but I'm worried about that because it's not good for optimization.

Hi! I found a way to use Korean text that fits inside one 8px row! It will only work in the next version of GB Studio though, since it has variable width (I can fit in more characters). I don't know if it'll be able to use it though, so for now it's just an idea. 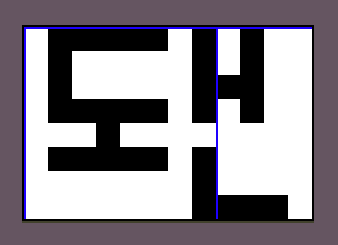 The first tile has ㄷ and ㅗ , the second one has ㅐ and ㄴ. I've done the math and I'll need over 230 tiles, but I'll be able to use more in the next update, so it should work.

The main problem is still the converter, I can't convert a hangul block into its individual jamo letters to analyze, at least not for now. The Unicode math method is not available in CTF yet. Still, if I somehow get to split it, I'd need to figure out more complicated stuff.

I can add individual jamo letters right now, it's nothing impressive, but it's a good start, I believe.

Will the next version of GB Studio mean version 2 beta?

I thought about the Hangul block separation problem.

Korean Unicode can also input only intermediate sounds such as "ㅞ". Of course you can't type endings in this state, but if you use this you will be able to think of a way to get Hangul input from CTF without splitting Hangul blocks. However, handling characters with ending sounds is a problem.

We are going to create a Korean Ascii sprite sheet using "half-combined fonts" as shown in the image attached to the first comment.

In English, only uppercase letters remain and most special characters disappear, but it seems that only the most frequently used midtones can be carefully selected and made.

If successful, I'll share the sprite sheet and the character array.

This way, you don't have to create an algorithm to separate and combine Hangul in GlyphBoy Swap.

This is because the number of completed characters cannot exceed 256 characters, no matter how many.

If you can't separate each "letter" in a Hangul "word", there's also a way to space them one character at a time through spaces as you type.

Oh, if you really want to put spaces, you have to omit them with special characters like "-".

Not a very neat way, but sorry. I can't come up with a good idea anymore.

In extreme cases, if you want to type some words, you may have to use characters other than Korean.

The next version will most likely be 3.0, which is months away.

Are you going to attempt to make a sheet and array? According to toxa, one of the developers of the next version, the variable width won't change the number of available tiles, but there will be fonts, so we'll probably have even more space for characters.

Also, the problem isn't separating words, it's separating characters to their jamo. I don't understand what you mean by ommiting spaces with special characters like "-"; spaces are not the problem.

for macos is ok?

Yeah, you will need Wine though.

Thank you very much for saving my day! 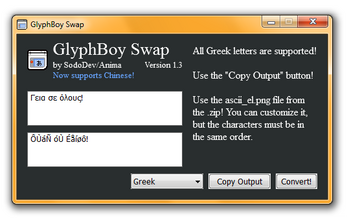 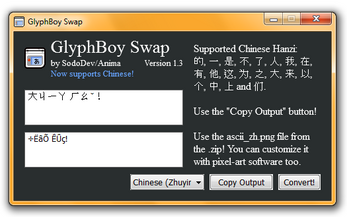